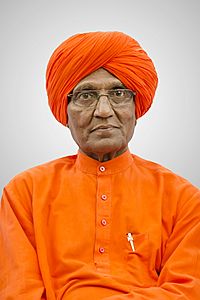 Agnivesh (born Vepa Shyam Rao; 21 September 1939 – 11 September 2020) was an Indian politician. He was a Member of Legislative Assembly from the Indian state of Haryana, an Arya Samaj scholar. He was best known for his work against bonded labour through the Bonded Labour Liberation Front, which he founded in 1981.

Agnivesh was the president of the World Council of Arya Samaj from 2004 to 2014. and served as the chairperson of the United Nations Voluntary Trust Fund on Contemporary Forms of Slavery from 1994 to 2004. He was born in Srikakulam, Madras Presidency.

All content from Kiddle encyclopedia articles (including the article images and facts) can be freely used under Attribution-ShareAlike license, unless stated otherwise. Cite this article:
Agnivesh Facts for Kids. Kiddle Encyclopedia.