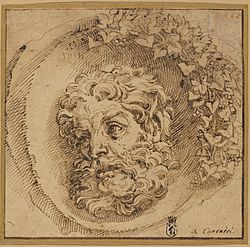 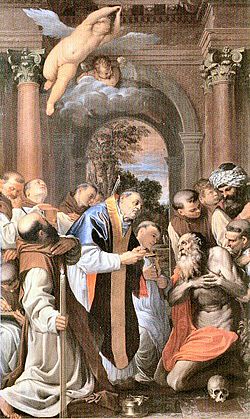 Agostino Carracci (sometimes also spelled Agostino Caracci, August 16, 1557 – March 22, 1602) was an Italian painter and printmaker. His brother Annibale and cousin Lodovico Carracci were more famous than he was.

He thought nature was an ideal. He founded a school that was competing with that of Caravaggio. Together with his brothers, he founded the Accademia degli Incamminati. The academy helped painters of the School of Bologna to become famous.

All content from Kiddle encyclopedia articles (including the article images and facts) can be freely used under Attribution-ShareAlike license, unless stated otherwise. Cite this article:
Agostino Carracci Facts for Kids. Kiddle Encyclopedia.