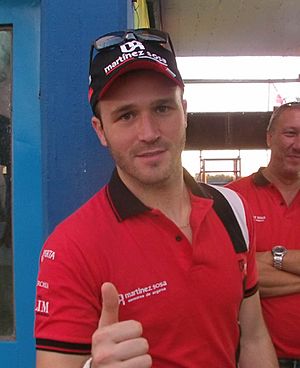 Agustín Canapino (born January 19, 1990) is an Argentine racing driver. He has run in different series, with major success in Turismo Carretera (TC). He is the son of Alberto Canapino, a renowned race car mechanic in Argentina.

Canapino wins the TC and Top Race Torneo Clausura championships in 2010. Between 2011 and 2017 he won all the titles in Top Race (with a Mercedes-Benz prototype), except for 2015, which was won by Matías Rodríguez. Won the Súper TC 2000 championship in 2016 with Chevrolet Argentina factory team and was a three-time TC champion between 2017 and 2019 with the Canapino Sport team (led by his father). He has also run a few races at Stock Car Brasil.

In 2019 he was called by Ricardo Juncos, director of Juncos Racing, to race the 24 Hours of Daytona in DPi. Along with Will Owen, René Binder and Kyle Kaiser, he finished eighth in the class. He also raced at Sebring.

Canapino was awarded the Olimpia de Oro 2018 for the best Argentine sportsman of the year. He is together with Juan Manuel Fangio, the only racing driver to win this award. He received the Olimpia de Plata of the discipline four times. His father, Alberto Canapino, died on February 15, 2021, from COVID-19

All content from Kiddle encyclopedia articles (including the article images and facts) can be freely used under Attribution-ShareAlike license, unless stated otherwise. Cite this article:
Agustín Canapino Facts for Kids. Kiddle Encyclopedia.