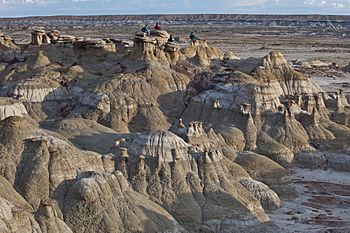 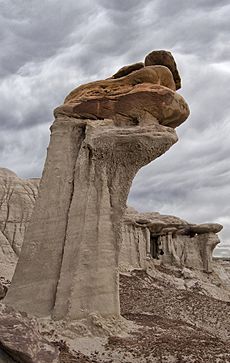 The BLM Wilderness Study Area (WSA) was declared in May 1992 and would protect an area of about 26.5 km2 (6,563 acres). The area was prospected by the dinosaur hunter Charles Hazelius Sternberg in the summer of 1921. Sternberg collected the type specimen of Pentaceratops fenestratus, a ceratopsid dinosaur from the late Cretaceous Period, within the WSA. Specimens from this area form a significant part of the vertebrate paleontology collection at the Museum of Evolution, University of Uppsala, Sweden. Fossil collecting here without a permit is prohibited by law.

Rock units within the Ah-Shi-Sle-Pah WSA include most of the upper Fruitland Formation (Fossil Forest Member) and lower part of the Kirtland Formation (Hunter Wash Member), both late Cretaceous in age. The rocks are dominated by mudstones and intermittent sandstones, with occasional resistant channel sandstones.

All content from Kiddle encyclopedia articles (including the article images and facts) can be freely used under Attribution-ShareAlike license, unless stated otherwise. Cite this article:
Ah-Shi-Sle-Pah Wilderness Facts for Kids. Kiddle Encyclopedia.