Congregation Ahavath Beth Israel is a synagogue in Boise, Idaho. Its 1896 building is amongst the oldest synagogues in continuous use west of the Mississippi River. The congregation is affiliated with the Union for Reform Judaism.

Boise's first Jews were present in the mining camps in the 1860s, but it was not until 1895 that a Congregation Beth Israel (Hebrew for House of Israel) was formed. Most of the congregants were from Germany and Central Europe and the synagogue followed Reformed ritual. Moses Alexander, mayor of Boise and governor of Idaho, was an early leader of the congregation.

The building was erected in 1896, and given a careful restoration in 1982.

Congregation Ahavath Israel (Hebrew for "Lovers of The House of Israel") was founded in 1912 by Orthodox immigrants from Eastern Europe. The congregation erected a building at the corner of 27th and Bannock Streets in 1947. The two congregations merged in 1986 to become Ahavath Beth Israel.

A personal memoir/history of Congregation Ahavath Israel was written by one of its member leaders, the late Mr. Joel Stone; a copy of this book is obtainable through the congregation's lending library. A more comprehensive history of Ahavath Beth Israel (which focuses more on Beth Israel's history) was also privately published for limited release by a former member, and is likewise available through the congregation. 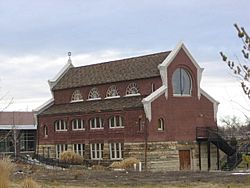 The synagogue's wood-shingled 1896 building blends two architecture styles popular with turn-of-the-century Jewish congregations. The exterior is in mainly in the popular Rundbogenstil style, though the tall windows flanking the large, rose window are in the form of Horseshoe arches. This Moorish Revival detail continues on the inside, where the Barrel-vaulted ceiling is supported by horseshoe arches. The architect described the building as designed in a modern Moorish style.

In 1972 the synagogue was added to the National Register of Historic Places. In 2003 the building was moved from its original location on State Street to its current location on Latah Street. During the move documentation was discovered showing the original construction was partially financed by Marshall Field and Levi Strauss & Co.

All content from Kiddle encyclopedia articles (including the article images and facts) can be freely used under Attribution-ShareAlike license, unless stated otherwise. Cite this article:
Ahavath Beth Israel (Boise, Idaho) Facts for Kids. Kiddle Encyclopedia.