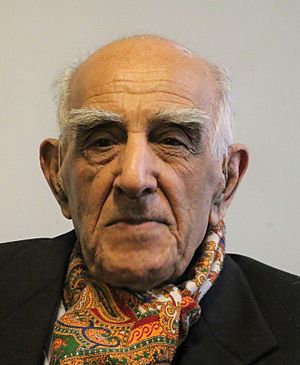 Ahmad Khan Eghtedari Gerashi (1925 – 16 April 2019) was an Iranian teacher, lawyer, writer, historian and geographer. He was known for his work as an academic of Persian Gulf studies. He wrote 40 books and more than 100 educational papers. His works covered a wide range of topics, including the reworking of poetry collections written by past poets, and translations of research works of non-Iranian scholars and writers. He also wrote scientific researches in the fields of the language and the culture of different regions of Iran. He worked as a lawyer for over forty years.

All content from Kiddle encyclopedia articles (including the article images and facts) can be freely used under Attribution-ShareAlike license, unless stated otherwise. Cite this article:
Ahmad Eghtedari Facts for Kids. Kiddle Encyclopedia.