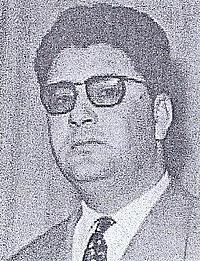 Ahmed Ben Salah (Arabic: أحمد بن صالح‎code: ar is deprecated ) (13 January 1926 – 16 September 2020) was a Tunisian politician and trades union leader. His ideas for a planned economy were important for Tunisia's economic development between 1957 to 1969. He was born in Moknine, Tunisia. Ben Salah was the Minister of Finance between 1961 to 1969.

All content from Kiddle encyclopedia articles (including the article images and facts) can be freely used under Attribution-ShareAlike license, unless stated otherwise. Cite this article:
Ahmed Ben Salah Facts for Kids. Kiddle Encyclopedia.