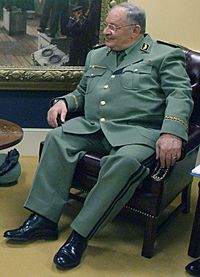 Ahmed Gaid Salah (Arabic: أحمد قايد صالح‎code: ar is deprecated ; 13 January 1940 – 23 December 2019) was a senior leader in the Algerian People's National Army. In 2004, he was appointed by then-President Abdelaziz Bouteflika to chief of staff of the army. On 15 September 2013, he was appointed Deputy Minister of Defense.

Salah died at a military hospital in Algiers of a heart attack on 23 December 2019 at the age of 79.

All content from Kiddle encyclopedia articles (including the article images and facts) can be freely used under Attribution-ShareAlike license, unless stated otherwise. Cite this article:
Ahmed Gaid Salah Facts for Kids. Kiddle Encyclopedia.