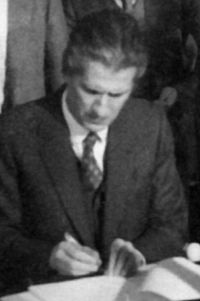 Dr. Ahmed Taleb Ibrahimi (Arabic: أحمد طالب الإبراهيمي‎code: ar is deprecated ) (born 5 January 1932) is an Algerian politician and educator. He was born in National Liberation Front (FLN). Ibrahimi was born in Setif, Algeria. Ibrahimi was Minister of Foreign Affairs from 1982 to 1988. Before, he was Counselor to the President from 1977 through 1982.

All content from Kiddle encyclopedia articles (including the article images and facts) can be freely used under Attribution-ShareAlike license, unless stated otherwise. Cite this article:
Ahmed Taleb Ibrahimi Facts for Kids. Kiddle Encyclopedia.