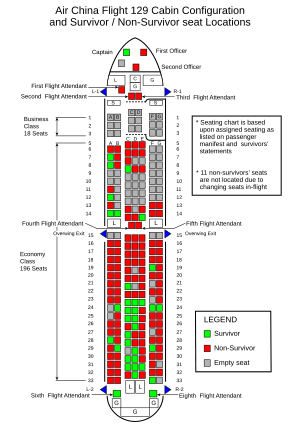 Air China flight 129 is an international scheduled flight from Beijing to Pusan. On April 15, 2002, the Boeing 767-2J6ER flying the route crashed into a mountain while trying to land at Busan-Gimhae International Airport. Of the 166 people on the aircraft, 129 were killed. Investigators determined that pilot error was the cause of the crash.

This was the first time an Air China crash killed people. It was also the worst plane crash in South Korea.

All content from Kiddle encyclopedia articles (including the article images and facts) can be freely used under Attribution-ShareAlike license, unless stated otherwise. Cite this article:
Air China Flight 129 Facts for Kids. Kiddle Encyclopedia.