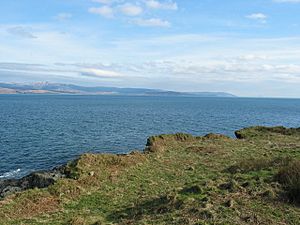 Airds Castle is a ruined medieval castle near Carradale, Kintyre, Argyll and Bute, Scotland. The castle held a position on the summit of a rocky headland between Carradale harbour and the bay of Port Righ, looking across Kilbrannan Sound to the Isle of Arran.

King James IV of Scotland granted the castle in 1498 to the Ayrshire landholder Sir Adam Reid of Stairquhite and Barskimming, together with other property in the same area. By the middle of the 16th century the lands were part of the barony of Bar, in North Kintyre, held by the MacDonalds of Dunnyveg. By 1605 they were back in the possession of the Reid family of Barskimming.

In 1972 it was designated a scheduled ancient monument.

All content from Kiddle encyclopedia articles (including the article images and facts) can be freely used under Attribution-ShareAlike license, unless stated otherwise. Cite this article:
Airds Castle Facts for Kids. Kiddle Encyclopedia.