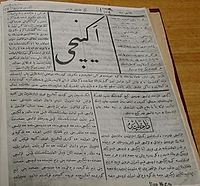 Hasan bey Zardabi started the newspaper. He was a journalist, teacher and scientist. Akinchi was thought to be almost revolutionary because of the language it was made in and that so many people could read it. Zardabi used a simpler form of the Azeri language so more people could read the paper.

The Russian governor of the Caucasus Dmitry Staroselsky liked Zardabi's plans. Staroselsky supported him in starting Akinchi. He was also the one to name the newspaper. He thought the name would make the authorities think that Akinchi was non-political and about agriculture. In addition to agriculture articles Zardabi wrote about medicine and biology. There were also stories about the social and cultural state of Muslims in the Caucasus. The first issue of Akinchi was printed on 22 July 1875.

Partly because Staroselsky left, the paper ended on 29 September 1877. There was also little money and few readers. There were only 300 constant readers. The paper helped there be more journalism in Azerbaijan.

All content from Kiddle encyclopedia articles (including the article images and facts) can be freely used under Attribution-ShareAlike license, unless stated otherwise. Cite this article:
Akinchi Facts for Kids. Kiddle Encyclopedia.