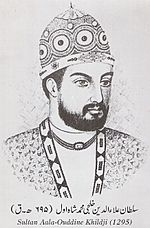 Ala-ud-din Khilji (Arabic: علاء الدین الخلجی‎code: ar is deprecated ; died 1316), born as Juna Muhammad Khilji, was the second ruler of the Khilji dynasty. He reigned from 1296 to 1316. He is considered the most powerful ruler of the dynasty,. He was a very ambitious person and a warmonger. He liked to call himself ‘The Second Alexander’. He took the title ‘Sikander-i-Sani’. He banned drinking of alcohol in open in his kingdom.

All content from Kiddle encyclopedia articles (including the article images and facts) can be freely used under Attribution-ShareAlike license, unless stated otherwise. Cite this article:
Ala ud din Khilji Facts for Kids. Kiddle Encyclopedia.