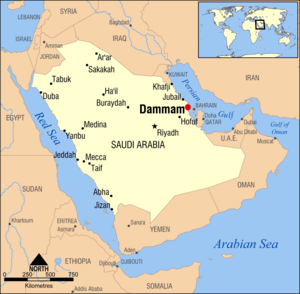 Alaa Brinji (Arabic: علاء برنجي ), born about 1984, is a Saudi journalist. He received a sentence of five years in a Saudi Arabian prison after he posted on Twitter in support of human rights and women driving cars. Brinji writes for the Saudi newspapers Al Sharq, Al Bilad, and Okaz.

Brinji was born around 1984. In 2012 he went to work for Al Sharq ("the Orient") newspaper. He was arrested in Dammam when he returned from a trip to Bahrain with his family. He was taken to Dammam prison.

Brinji was arrested on May 12, 2014. He was held in solitary confinement and not permitted to speak to anyone. He was not allowed access to a lawyer. On March 24, 2016, he was convicted by Saudi Arabia’s Specialized Criminal Court (SCC), a counter-terrorism court. The charges were “insulting the rulers of the country”, “inciting public opinion”, “accusing security officers of killing protesters in Awamiyya”, “ridiculing Islamic religious figures” and “violating Article 6 of the Anti-Cyber Crime Law”. He received a travel ban for eight years and a fine of 50,000 Saudi riyals (about $13,300 USD). The court also ordered his Twitter account closed.

International groups criticized the Saudi government because Brinjui did not have a lawyer and because he had a skin condition and did not have a cell with a daylight.

All content from Kiddle encyclopedia articles (including the article images and facts) can be freely used under Attribution-ShareAlike license, unless stated otherwise. Cite this article:
Alaa Brinji Facts for Kids. Kiddle Encyclopedia.