Alambique Creek, or Arroyo Alembique, is a 2.7-mile-long (4.3 km) stream located in San Mateo County, California in the United States. It is part of the San Francisquito Creek watershed. 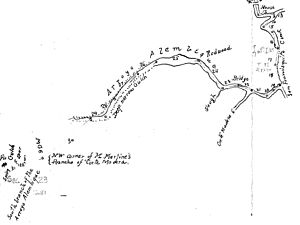 The creek flowed through the hamlet of Searsville

The creek's name is Spanish for "still," referring to a liquor distillery. Older Spanish spells it alembique with an "e". The English spelling is alembic, a type of still that is used today. The e spelling dominates in the 1800s and continued on most maps until the 1930s. The name refers to moonshiners Tom Bowen and Nicholas Dawson, English seaman deserters, who built an illegal still on the creek in 1842. The creek runs through Wunderlich Park in Woodside, California, where, in 1904, the creek was used by J. A. Folger for the first hydro-electrical power system in the region.

Alambique Creek was once a historical steelhead trout (coastal rainbow trout) (Oncorhynchus mykiss irideus) spawning stream. In 1981, the creek was fish sampled and two stream resident rainbow trout which have been isolated from the Bay by Searsville Dam were collected where the creek crosses La Honda Road. In May 2002, the culvert beneath Highway 84 was identified as an impassable barrier to upstream migration.

All content from Kiddle encyclopedia articles (including the article images and facts) can be freely used under Attribution-ShareAlike license, unless stated otherwise. Cite this article:
Alambique Creek Facts for Kids. Kiddle Encyclopedia.