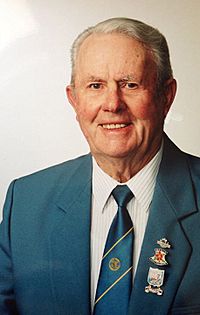 Sayers represented The New Zealand Herald prior to World War II. When the war was over he was invited to join the Auckland Star where he was the first reporter in New Zealand to receive a personal by-line. In 1953 he was an official journalist on the tour of Queen Elizabeth 11 to the Pacific Islands and New Zealand.

All content from Kiddle encyclopedia articles (including the article images and facts) can be freely used under Attribution-ShareAlike license, unless stated otherwise. Cite this article:
Alan Sayers Facts for Kids. Kiddle Encyclopedia.