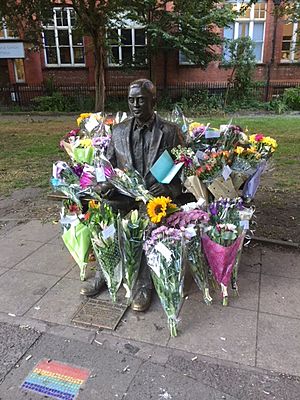 The Alan Turing Memorial, situated in Sackville Park in Manchester, England, is a sculpture in memory of Alan Turing, a pioneer of modern computing. Turing is believed to have killed himself in 1954. As such he is as much a gay icon as an icon of computing, and it is no coincidence that this memorial is situated near Canal Street, Manchester's gay village.

Turing is depicted sitting on a bench situated in a central position in the park. On Turing's left is the University of Manchester and on his right is Canal Street.

The statue was unveiled on 23 June, Turing's birthday, in 2001. It was conceived by Richard Humphry, a barrister from Stockport, who set up the Alan Turing Memorial Fund in order to raise the necessary funds. Humphry had come up with the idea of a statue after seeing Hugh Whitemore's play Breaking the Code, starring Sir Derek Jacobi. Jacobi became the patron of the Fund. Glyn Hughes, an industrial sculptor from Adlington near Westhoughton, was commissioned to sculpt the statue. Roy Jackson (who had previously raised funds for HIV/AIDS and Gay Awareness in Manchester) was asked to assist in the funding raising to make the memorial happen. Within 12 months, through donations and a "village lottery", the money was raised. This allowed the statue to be cast in China. Glyn Hughes had found contacts that could manufacture and ship an identical bronze statue to that which would have cost c. £50,000 in the UK. The cost of the memorial was achieved with the £16,000 raised. 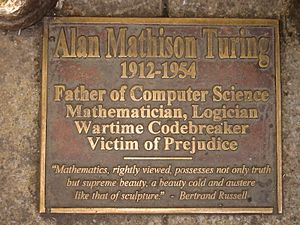 Turing is shown holding an apple. The cast bronze bench carries in relief the text "Alan Mathison Turing 1912–1954" and the motto "Founder of Computer Science" as it would appear if encoded by an Enigma machine; 'IEKYF RQMSI ADXUO KVKZC GUBJ'.

A plaque at the statue's feet says "Father of computer science, mathematician, logician, wartime codebreaker, victim of prejudice". There is also a Bertrand Russell quotation saying "Mathematics, rightly viewed, possesses not only truth, but supreme beauty — a beauty cold and austere, like that of sculpture."

All content from Kiddle encyclopedia articles (including the article images and facts) can be freely used under Attribution-ShareAlike license, unless stated otherwise. Cite this article:
Alan Turing Memorial Facts for Kids. Kiddle Encyclopedia.