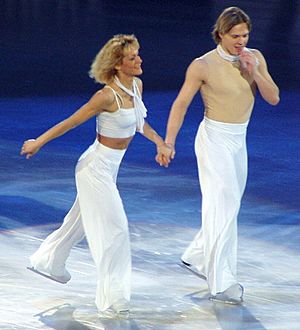 Albena Denkova (born December 3, 1974 in Sofia) is an ice dancer from Bulgaria. Her skating partner and fiancee is Maxim Staviski.

Denkova and Staviski are the first Bulgarian skaters to win Worlds, which they did in 2006 and 2007.

In 2006, Denkova was elected as the president of the Bulgarian figure skating federation.

After 2007 Worlds, Denkova and Staviski did not announce if they would retire, leaving it open. However, in the summer of 2007, Staviski was involved in a fatal car crash that killed a man and left someone else in a coma. Staviski survived unharmed. However, he was legally drunk. Denkova and Staviski have withdrawn from the Grand Prix events they were scheduled to attend. Denkova has not made an official announcement as to their retirement, but if Staviski goes to jail, they will be unable to compete.

Denkova and Staviski are known for being pioneers of dance lifts. They invented or popularized most of the ice dance lifts currently in use at the international level.

All content from Kiddle encyclopedia articles (including the article images and facts) can be freely used under Attribution-ShareAlike license, unless stated otherwise. Cite this article:
Albena Denkova Facts for Kids. Kiddle Encyclopedia.