Albert Magnin (April 13, 1846 - March 18, 1906) was an American politician from Pennsylvania who served as a Republican member of the Pennsylvania House of Representatives for Delaware County from 1889 to 1892. 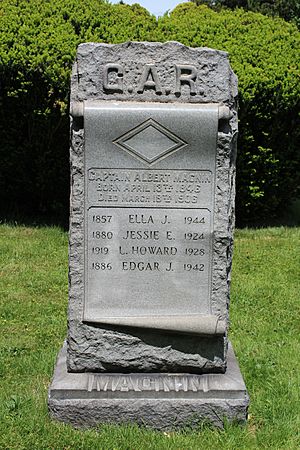 Magnin was born in Philadelphia, Pennsylvania. He served in the Pennsylvania Volunteer Infantry division during the U.S. Civil War in the following capacities:

On September 11, 1889, Captain Magnin was the keynote speaker at the dedication of a regimental monument for the 99th Pennsylvania Infantry at the portion of the Gettysburg battlefield known as the Devil's Den.

Magnin worked as a farmer and as editor and proprietor of the Darby Progress newspaper.

He was elected to the Pennsylvania House of Representatives for Delaware County and served from 1889 to 1892.

Magnin served as Postmaster for the United States Postal Service in Darby, Pennsylvania from 1900 to 1906.

Magnin was married to Ellen Jane (Fielding) Magnin and together they had 4 sons and 3 daughters. He died in Darby, Pennsylvania and was interred at the Arlington Cemetery in Drexel Hill, Pennsylvania.

All content from Kiddle encyclopedia articles (including the article images and facts) can be freely used under Attribution-ShareAlike license, unless stated otherwise. Cite this article:
Albert Magnin Facts for Kids. Kiddle Encyclopedia.