Drexel Hill is a census-designated place (CDP) in Upper Darby, Delaware County, Pennsylvania, United States. Drexel Hill is located 7 miles (11 km) west of Center City, Philadelphia, and is part of the Philadelphia metropolitan area. The population was 28,043 at the 2010 census, down from 29,364 at the 2000 census.

Drexel Hill is located in the western part of Upper Darby Township at 39°57′00″N 75°18′7″W﻿ / ﻿39.95000°N 75.30194°W﻿ / 39.95000; -75.30194 (39.949962, -75.301841). The CDP is bordered to the north by Haverford Township, to the east by the Kirklyn, Highland Park, Beverly Hills, and Bywood neighborhoods of Upper Darby, to the southeast by the borough of Lansdowne, to the south by the borough of Clifton Heights and the Westbrook Park neighborhood of Upper Darby, and to the southwest by Springfield Township. Darby Creek forms the southwestern/southern border of the CDP. U.S. Route 1 (Township Line Road) runs through the northwest corner of the CDP and forms most of its northern border with Haverford Township. 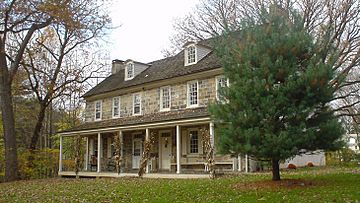 The Lower Swedish Cabin on Creek Road alongside Darby Creek is possibly the oldest log house in North America. The cabin is believed to have been built by early Swedish settlers who were part of the New Sweden colony. The cabin was most likely built between 1638 and 1655, but the exact year is not known. Log cabin architecture was a major contribution of the colonial Swedes. European settlers from other countries copied this style of housing, and the log cabin became popular all across America.

Collen Brook Farm is a historic home and associated buildings located at the end of a lane off Mansion Road at Marvine Avenue in Drexel Hill. The original house and barn were built about 1710 by Abraham Lewis. It was most recently acquired by Upper Darby Township in 1989. It is open to the public on Sundays from May through October. 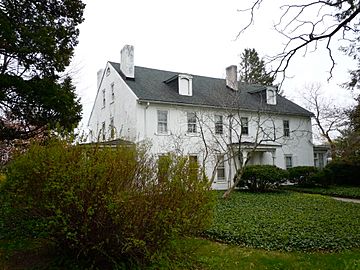 Thornfield, the estate of famed abolitionist and Quaker Thomas Garrett, lies on Garrett Road (named for his family, who were among the earliest settlers of that part of the township) and Maple Avenue in Drexel Hill. Garrett resided here before 1822 and would later work as a station master in Wilmington, Delaware, the last stop on the Underground Railroad. In 1956, the Thornfield estate was purchased by Caroline and Walter Isard, active Quakers who moved to the area when Walter founded the Regional Science department at the University of Pennsylvania. Caroline went on to found the Fair Housing Council of Suburban Philadelphia together with other concerned citizens in the area. As of 2014, the estate is owned by Randal T. Rioux. It is currently undergoing restoration, along with renovations necessary to preserve its history and allow for modern capabilities.

All content from Kiddle encyclopedia articles (including the article images and facts) can be freely used under Attribution-ShareAlike license, unless stated otherwise. Cite this article:
Drexel Hill, Pennsylvania Facts for Kids. Kiddle Encyclopedia.