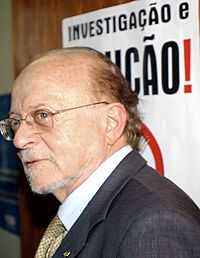 Alberto Goldman ( 12 October 1937 – 1 September 2019) was a Brazilian engineer and politician. He was elected Vice Governor of São Paulo in 2006 with Governor José Serra. Goldman became governor of São Paulo on 6 April 2010. He resigned on 1 January 2011. He was National President of the Brazilian Social Democracy Party from November 2017 through December 2017.

Goldman was born in São Paulo. He died on 1 September 2019 at a São Paulo hospital from problems caused by cancer-related surgery, aged 81.

All content from Kiddle encyclopedia articles (including the article images and facts) can be freely used under Attribution-ShareAlike license, unless stated otherwise. Cite this article:
Alberto Goldman Facts for Kids. Kiddle Encyclopedia.