Albuquerque Museum of Art and History facts for kids

The museum was first opened as the Museum of Albuquerque in 1967 and located in the Albuquerque International Sunport. The collection outgrew the available space in the terminal, and the current location was built in 1979. The building was designed by Antoine Predock and was significantly expanded in 2005. 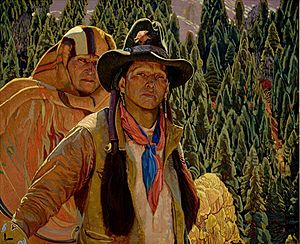 The museum's permanent exhibits are dedicated to art in New Mexico, and the history of Albuquerque include early maps, conquistador armor, weavings, and other artifacts of colonial life in New Mexico. The museum also hosts changing exhibits, a massive photo archive, art galleries, and maintains an outdoor sculpture garden on the grounds.

The museum has three permanent exhibits:

The Albuquerque Museum also operates tours for a late 18th-century house in Corrales, New Mexico called Casa San Ysidro. The house features a recreation of a 19th-century rancho, including a family chapel, a central plazuela and an enclosed corral area.

All content from Kiddle encyclopedia articles (including the article images and facts) can be freely used under Attribution-ShareAlike license, unless stated otherwise. Cite this article:
Albuquerque Museum of Art and History Facts for Kids. Kiddle Encyclopedia.