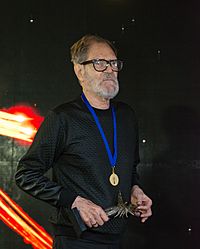 Alejandro Sieveking Campano (5 September 1934 – 5 March 2020) was a Chilean playwright, theatre director and actor. He was one of the founders of the Teatro del Ángel (Angel Theatre Company) in Chile and Costa Rica. In 2017, he was awarded the National Prize for Performing and Audiovisual Arts. His theatre credits include Mi hermano Cristián (1957), Ánimas de día claro (1962), La remolienda (1965), Tres tristes tigres (1967) and Ingenuas palomas (1989).

Sieveking was born in Rengo, O'Higgins. He married actress Bélgica Castro in 1961. On 5 March 2020, Sieveking died in Santiago at the age of 85. His wife died the next day.

All content from Kiddle encyclopedia articles (including the article images and facts) can be freely used under Attribution-ShareAlike license, unless stated otherwise. Cite this article:
Alejandro Sieveking Facts for Kids. Kiddle Encyclopedia.