Aleksandar Dragović (Serbian Cyrillic: Александар Драговић born 6 March 1991) is an Austrian professional footballer who plays as a defender for Serbian club Red Star Belgrade and the Austria national team. He is well known for his performances as a tough-tackling centre-back.

Dragović started his career by playing in the youth teams of Austrian giants Austria Wien and started playing for their B-squad in 2007. As of 1 February 2011 Dragović transferred to FC Basel in the Swiss Super League. He made his team debut in the 3:0 home win over FC St. Gallen. At the end of the 2010–11 Swiss Super League season Dragović won the Swiss Championship title with FC Basel. In July 2011 he played with his new club in the Uhrencup and won the tournament. He scored his first Super League goal in the 3–0 home win against Servette FC on 1 October 2011. At the end of the 2011–12 season Dragović won the Double, the League Championship title and the Swiss Cup with Basel.

During Basel's 2012–13 season the team missed their Champions League aim. But in the 2012–13 UEFA Europa League Basel advanced as far as the semifinals, meaning that they played a total of 20 European matches. Dragović missed solely the second leg of the semi-final at Stamford Bridge due to a yellow card suspension, but had played in all the other European ties.

In the domestic championship he played in 32 of the 36 games. He scored three goals in the domestic league this season, all three being against Servette. At the end of the Swiss Super League season 2012–13 Dragovic won the Championship title and was Swiss Cup runner up with Basel.

On 26 July 2013, Dragović had signed a five-year contract with Ukrainian club FC Dynamo Kyiv. On 17 May 2015, Dragović helped Dynamo beat Dnipro 1–0 which was the game that won Dynamo their first Ukrainian Premier League title in six years.

On 4 November 2015, Dragović scored his first ever UEFA Champions League goal in the group stage against Chelsea at Stamford Bridge on the 78th minute, as well as scoring an own goal on the 34th. Dynamo ended up losing that match 2–1. In that season he helped Dynamo reach the last sixteen of the UEFA Champions League for the first time in 16 years, getting knocked out by Manchester City 1–3 on aggregate.

On 26 May 2021, Dragović signed a three-year contract with Red Star Belgrade. 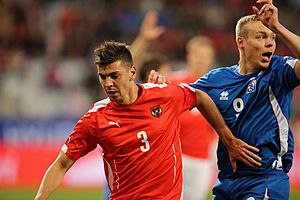 Dragović in action against Iceland in 2014

Dragović also used to be part of the national under-17 and under-19 Austrian teams. He was called up for the national team of Austria for their 2010 FIFA World Cup qualification match against Romania, but due to an injury he was unable to play. He was called up again by the Austrian head coach Dietmar Constantini for the match against Serbia. He made his international debut in this match on 6 June 2009. Dragović scored his first goal on 18 November 2014 in a 1–2 home defeat to Brazil. He made the final squad for Euro 2016, where he was sent-off in the first game against Hungary, and missed a penalty in the decisive match against Iceland, which ended in a 2–1 defeat.

Dragović was born in Vienna to parents from Belgrade, Serbia. His favourite team is Red Star Belgrade. Dragović attracted serious public criticism when he playfully slapped the Swiss politician Ueli Maurer several times on his head during the celebrations subsequent to the Cup Final in May 2012. After he made further condescending comments stating that he was very reluctant to apologize and said that "on the inside everybody knows, so I believe, that it was very, very much fun doing it", he had to travel to the Bundeshaus in Berne and apologize personally to Ueli Maurer.

All content from Kiddle encyclopedia articles (including the article images and facts) can be freely used under Attribution-ShareAlike license, unless stated otherwise. Cite this article:
Aleksandar Dragović Facts for Kids. Kiddle Encyclopedia.