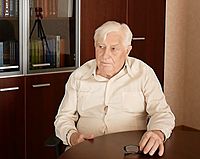 Aleksandr Semenovich Kapto (April 14, 1933 – April 19, 2020) was a Russian-Ukrainian scientist, sociologist, political scientist, journalist and politician. In 2008, he became head of the UNESCO International Board of the Institute of Socio-Political Research under the Russian Academy of Sciences (RAS). He was born in Dnipropetrovsk Oblast, Ukrainian SSR, USSR.

He was a Soviet Ambassador to Cuba from 1985 to 1990, and the last Soviet and first Russian Ambassador to the Democratic People's Republic of Korea.

All content from Kiddle encyclopedia articles (including the article images and facts) can be freely used under Attribution-ShareAlike license, unless stated otherwise. Cite this article:
Aleksandr Kapto Facts for Kids. Kiddle Encyclopedia.