Kids Encyclopedia Facts
Not to be confused with Alexander Mejía.

Alejandro DeJesus Mejia (born January 18, 1991) is an American professional baseball infielder for the Acereros de Monclova of the Mexican League. He played college baseball for the Arizona Wildcats, winning the 2012 College World Series. He has played in Major League Baseball (MLB) for the St. Louis Cardinals.

Mejia attended El Camino Real High School in Woodland Hills, California, and the University of Arizona. Playing college baseball for the Arizona Wildcats, Mejia became the team's starting shortstop as a freshman. He was named the 2012 Pac-12 Conference Baseball Player of the Year, and was a member of the 2012 College World Series champions. 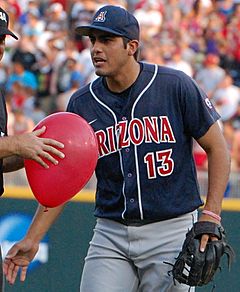 Mejia with Arizona at the 2012 College World Series

Mejia began the 2017 season with Springfield, and was promoted to Memphis. On June 28, the Cardinals promoted Mejia to the major leagues. He made his debut the following day, against the Arizona Diamondbacks, when he started at second base and batted eighth, where he went 0-for-2 before being pinch hit for. He had first major league hit and home run against the Washington Nationals on July 1, 2017. He was outrighted to Memphis on November 6, 2017.

Mejia spent all of 2018 with Memphis, compiling a .273 batting average with four home runs and 35 RBIs in 108 games. He helped lead Memphis to the 2018 Triple-A National Championship Game, where they defeated the Durham Bulls 14-4. Mejia was named the MVP of the game after going five-for-five with five RBIs. He elected free agency on November 2, 2018.

Mejia's father, Carlo, was named an All-American while playing college baseball for Pepperdine University in 1975, and played professionally in the Mexican League. Mejia has three siblings; his two older sisters and his cousin, played college softball for Long Island University.

All content from Kiddle encyclopedia articles (including the article images and facts) can be freely used under Attribution-ShareAlike license, unless stated otherwise. Cite this article:
Alex Mejia Facts for Kids. Kiddle Encyclopedia.