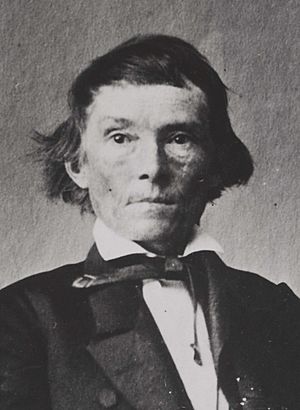 Alexander Hamilton Stephens (February 11, 1812 – March 4, 1883) was an American and Confederate politician. He was from Georgia. Stephens was short and sickly for much of his life. Stephens owned a fair number of slaves. He served as a Whig congressman from 1843 to 1859. Later, he became a member of the Constitutional Union Party and then a Democrat. Stephens was the Vice-President of the Confederacy from 1861 to 1865. While Vice-President, he tried to end the war and did not get along with Confederate President Jefferson Davis. After the war, Stephens again was a U.S. Congressman, and was Governor of Georgia for a short time.

All content from Kiddle encyclopedia articles (including the article images and facts) can be freely used under Attribution-ShareAlike license, unless stated otherwise. Cite this article:
Alexander Stephens Facts for Kids. Kiddle Encyclopedia.