He was shot by the police on the evening of August 10, 2020, near Pushkinskaya metro station in Minsk (after that it was said by the chief of GUBOPiK (a special police unit in Belarus) Nikolai Karpenkov). On February 2, 2021, TUT.BY got the results of the audio test of the record made by BYPOL. Talks on the killing of Alexander Taraikovsky and more are on the record. The expert test made it clear that the Nikolai Karpenkov's voice is on the record and there are no signs of changes made to it.

He was buried at Western cemetery in Minsk on August 15, 2020. The death of Taraikovsky caused more protests.

On December 21, 2020, the representative of the public initiative "Belarusian People's Tribunal" Igor Makar published the materials of the preliminary investigation. They claim that Aleksandr Taraikovsky was deliberately and cynically killed by an employee of the Special Anti-Terrorist Unit "Almaz" Korovin Nikita Yuryevich(born in 1993), with the complicity of other unidentified employees of this spesial forces unit. 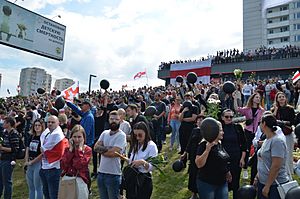 On November 19, 2020, Jim Gilmore, United States Ambassador to the Organization for Security and Cooperation in Europe, spoke on a three-month end of the investigation into the death of Alexander Taraikovsky. He said that it is another sign of “the impunity with which Belarusian security forces pursue their violent crackdown on peaceful protesters.”

On November 26, 2020, European Parliament discussed the situation in Belarus. The discussion resulted in the adoption of a resolution, supported by an absolute majority of deputies, calling for a "prompt, thorough, impartial and independent investigation into the death of Alexander Taraikovsky."

All content from Kiddle encyclopedia articles (including the article images and facts) can be freely used under Attribution-ShareAlike license, unless stated otherwise. Cite this article:
Alexander Taraikovsky Facts for Kids. Kiddle Encyclopedia.