The Alexandria Black History Museum, located at 902 Wythe St., Alexandria, Virginia, is operated by the City of Alexandria. The building was formerly the Robert Robinson Library, originally constructed in 1940 as the first "separate but equal" library for African Americans in the segregated city. 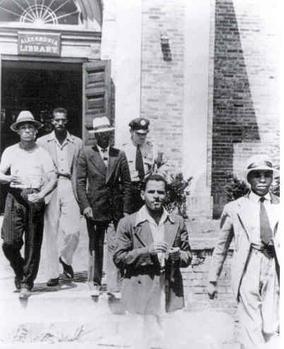 Since the library's budget was collected from the taxes paid by every American Citizen regardless their race, the lawyer Samuel Wilbert Tucker organized in 1939 a pacific sit-in at the new and "whites only" Alexandria, Virginia public library (Kate Waller Barret branch) that lead to their arrest by Virginia's police.

The 1939 event is commonly cited as the first non-violent protest by African Americans against racial segregation. The museum has changing exhibitions on local and national topics related to African Americans.

The museum also operates the Alexandria African American Heritage Park, a 9-acre (3.6 ha) park at 500 Holland Lane, which contains a 1-acre (0.40 ha) nineteenth-century African-American cemetery that was buried under a city landfill in the 1960s.

All content from Kiddle encyclopedia articles (including the article images and facts) can be freely used under Attribution-ShareAlike license, unless stated otherwise. Cite this article:
Alexandria Black History Museum Facts for Kids. Kiddle Encyclopedia.