Alexey Ekimyan (Armenian: Ալեքսեյ Հեքիմյան, Russian: Алексей Гургенович Экимян (April 10, 1927, Baku - April 24, 1982, Moscow) was a famous Armenian-Russian composer, and author of popular songs. Ekimyan was also a General of Soviet militsia (police) and was the head of Criminal Investigation Department of Moscow region. He was considered the only popular composer in the world who ruled a law-enforcement department at the same time. Ekimyan awarded by the "Renowned Master of the Arts" Armenian SSR official title.

Ekimyan's first song for the Moscow International Festival (1957) was approved by Vano Muradeli ("I don't know if you would become a general, but you would become a composer!"). His songs were performed and recorded by prominent Soviet singers that include Lyudmila Zykina, Iosif Kobzon, Lusine Zakaryan. Some hits by Ekimyan were chosen for the "Song of the Year" all-Soviet festivals during the 1970s-'80s. 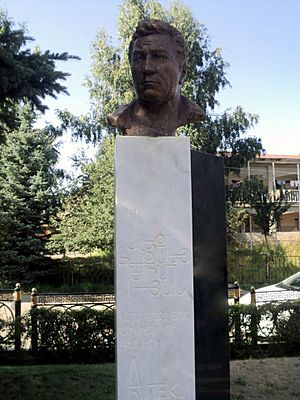 The documentary film-concert "Paths of My Memory" (1979, 27 min.) by Yerevan Studio is dedicated to the Alexey Ekimyan.

All content from Kiddle encyclopedia articles (including the article images and facts) can be freely used under Attribution-ShareAlike license, unless stated otherwise. Cite this article:
Alexey Ekimyan Facts for Kids. Kiddle Encyclopedia.