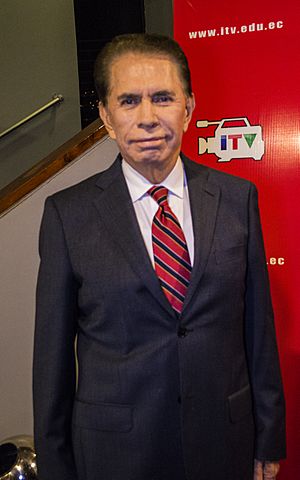 Pablo Alfonso Espinosa of the Monteros Rueda (born 24 December 1941) is an Ecuadorian news anchor and vice-president of news of Ecuavisa in Quito. He holds the Guinness World Record for "Longest career as Television News broadcaster".

Espinosa de los Monteros was born on 24 December 1941 in Quito, Ecuador. His parents were from Ibarra.

Espinosa de los Monteros worked for different radio stations in the cities of Ibarra and Guayaquil until 1962. In 1963 he was news director for Radio La Prensa. He began in Ecuavisa in 1967, the year of its foundation, as the first news anchor of the station. He was News Director for almost three decades. He hosted the Ecuadorian version of "Who wants to be millionaire" (2001 - 2004 and 2009 - 2011). He received the “Honorato Vázquez” medal from the Ecuadorian government in 1992.

In August 2014, he obtained the Guinness World Record for "Longest career as Television News broadcaster”.

All content from Kiddle encyclopedia articles (including the article images and facts) can be freely used under Attribution-ShareAlike license, unless stated otherwise. Cite this article:
Alfonso Espinosa de los Monteros Facts for Kids. Kiddle Encyclopedia.