Alford Windmill is a five-sailed windmill in Alford, Lincolnshire and the only surviving windmill out of four. Today the windmill has been restored to working order, and grinds grain to organic flour. It is open as a tourist attraction. 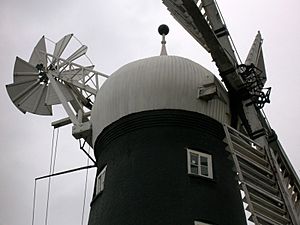 Close up of sails

Alford Windmill is a seven-storeyed Lincolnshire type tower windmill with a stage – featuring a slender, tapering brick tower, tarred to keep the moisture out, covered with a white onion-shaped (ogee) cap with fan-stage, huge fantail, and white sails. She has five patent-shutter sails and originally three, later on four, pairs of stones (two pairs of grey or peak stones (cut from rock found in the Peak District) and two French "quartzite" stones).

The mill provides a flywheel at the mill's base connected by pulley to a town gas driven engine in the adjacent shed. This engine makes the mill independent of wind if it is insufficient to drive the sailcross. In its heyday Alford Mill was capable of grinding 4 to 5 tonnes of corn a day. 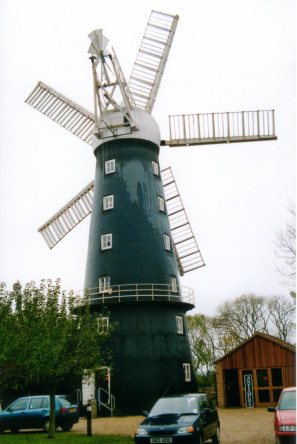 Built as a seven-storeyed windmill in 1837 by the well-known local millwright John Oxley the mill belonged to a group of four windmills and is the sole survivor today. At the end of the 19th to the beginning of the 20th century Alford featured a four-sailed mill, Wallace's or Station Mill, now a stump; a five-sailed windmill, Hoyles's Windmill, today's Alford Mill; and a six-sailer, the six-storeyed Myers's Windmill, built in 1827 with six left-handed sails, and also called the Alford Mill dismantled in 1973.

The last commercial operators of the windmill were the Hoyles family. Purchased by Harry Hoyles, a local farmer and land owner, in the early 20th century, the business of milling and baking continued until 1955, run by his sons Walter, Arthur and Winston (The Miller). In those times the mill was known as the Hoyles's Mill. The business closed due to advancements in technology in 1955 and the mill was initially sold to Fred Banks of Kirton in Lindsey in 1957, a private buyer and owner of Mount Pleasant Mill, who subsequently restored the windmill to working order. The last surviving windmill became then known as the Alford Windmill.

In 1978, miller Fred Banks had to replace the mill's cap and all five sails. The same year the mill changed hands to the Lincolnshire County Council which took care for the mill's restoration over many years resulting in the fine edifice that now once again plays its part in the local community. The mill remained leased to Mr Banks, the former owner, until 1986 when he gave up his milling business, his place being taken by James Waterfield of Boston in the following year, owner of the famous Maud Foster Windmill. The mill was then leased to Geoff Dees for some years, until the lease was sold in January 2010 to the current lease holder, Ian Shepherd.

All content from Kiddle encyclopedia articles (including the article images and facts) can be freely used under Attribution-ShareAlike license, unless stated otherwise. Cite this article:
Alford Windmill Facts for Kids. Kiddle Encyclopedia.