Alfred is a town in Allegany County, New York, United States. The population was 5,237 at the 2010 census.

The Town of Alfred has a village named Alfred in the center of the town.

Alfred University and Alfred State College are located in the Village of Alfred.

Allegany County was re-organized on March 11, 1808. "At the same time, the town of Alfred was named and organized by the state legislature as one of five towns formed from the larger town (actually co-extensive with the county) of Angelica: Angelica, Alfred, Caneadea, Nunda, and Ossian."

"The naming of Alfred has traditionally been attributed to Alfred the Great. That attribution may never be definitively verified because there appears to be no extant document from the period when the town was named that ties it to King Alfred – i.e., no town, county, or state record regarding the source of the name. Despite that missing documentation—There is, however, evidence in support of the legend, and there are no records that point to any other source for the name. Nineteenth-century accounts do cite Alfred the Great as the source. In addition, there was no early settler named Alfred (first or last name) for whom the town might have been named."

"The Seneca Indians were the original owners of this land, but following the American victory in the American Revolutionary War, "all foreign claims of ownership were extinguished, and the power of the Indian Confederacy was broken... but New York and Massachusetts each claimed ownership under conflicting patents. In 1786 New York conceded the lands to Massachusetts but retained the sovereignty." Ownership of the land changed hands several times until 1791, when "most of the lands of Alfred were sold to the settlers at from $2 to $4 per acre."

"The earliest settlers followed Indian trails, the chief one leading from Fort Niagara to and down the Canisteo, Chemung and Susquehanna rivers. This passed near the northeastern corner of Alfred and had become well worn by war parties during the Revolution. Settlers from the far east might come by Albany, and the Schoharie and Susquehanna valleys or by Schenectady, Utica, Geneva and Bath. Whatever way they chose the roads were mostly bridgeless and of the most primitive kind, making travel tedious and difficult. From Hornellsville westward for many years the only roads were little more than wood paths marked by 'blazed trees'."

"1807: The first settlers moved in the Alfred area, began clearing forests and building log cabins in order to bring their families in. These settlers were three men – Seventh Day Baptists – from Berlin and Brookfield, New York: Clark Crandall, Nathan Green, and Edward Green. Crandall later became a county judge and joined the state legislature." "The original settlers were mainly Seventh-day Baptists. Their first church in this country was organized by members who withdrew from the First Baptist church at Newport, R. I., in 1671. This church was the sixth Baptist church organized in America, and they differed from their mother church only in the observance of the "seventh day," or Saturday, as the Sabbath. During the latter half of the 17th century, and the whole of the 18th, this people established strong settlements in the southwestern part of Rhode Island, chiefly in Westerly and Hopkinton. Out of these by 1800 grew strong settlements and churches in Rensselaer, Jefferson, Madison, Cortland and other counties of this state. From these out-stations and from the original settlements emigration set westward to the 'Genesee country'." 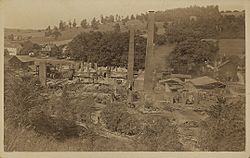 "The log schoolhouse early sprang up in each neighborhood, and the district school, the singing-school, the spelling-school and the Sabbath-meeting became a part of the life of the community. As prosperity permitted, the large frame-barn took the place of the pole-sided, straw-shingled stable, and a little later the frame house, with its shaved shingle roof, much smaller generally than the barn, replaced the log hut as the family dwelling." "Amos Crandall, called 'Deacon Crandall' and originally from Rhode Island, taught school four winters at $10 per month, boarding himself and taking his pay in produce or labor. He was one of the earliest teachers of singing schools in the town, and established the first Sabbath school."

"The first business of the settlers in Alfred was to make "clearings." The ashes, carefully saved from the burned fallows and converted into potash, was the first source of revenue. The making of maple sugar supplied home requirement and the surplus, bartered with the merchant, helped to secure needed family supplies. Lumber had little value beyond the cost of making, on account of lack of roads and a market. Those who could hunt could in that way help supply themselves with food, especially if they were fortunate enough to secure the bounty offered for the killing of wolves. Flax was raised, prepared by hand, carded, spun, woven and converted into clothing. When it became possible sheep were raised and their wool formed, entirely by hand processes, into clothing. Few indeed were the early homes into which the cards, the spinning-wheel, the flag-wheel, the quill-wheel, the swifts, the warping-bars, and loom did not find an early entrance. Oxen were in general use because considered more economical and useful than horses. The virgin soil, enriched by the ashes of the burned timber, was highly productive; and when the seasons were favorable, good crops of grain rewarded the farmer's toil among the roots and stumps. Year by year the clearings widened, orchards were planted, flocks and herds increased and roads became more passable. Here and there a mill was built, and a few small stores were opened."

"The shale rock, and heavy underlying beds of clay of the northeastern part of the town, becoming of great value as material for fine brick and pottery, extensive terra cotta works have been established at Alfred for the manufacture of roofing tile, etc. These works have cost $150,000 and employ from 20 to 50 men. Tile of improved patterns excelling any other manufactured in America is shipped to every part of the country. Extensive pressed-brick works have also been established at Alfred Station."

"The first settlers were, for the most part, sons of soldiers of the Revolution, and themselves soldiers of the war of 1812. Alfred's sons were conspicuous in the border warfare in Kansas. At the opening of the Rebellion they were prompt to respond to the call for volunteers... The names of nearly 150 of her boys are on her roll of honor. Four or five of the professors and hundreds of Alfred students fought in the Union ranks, many attaining high rank."

The Village is the home to Alfred State College, Alfred University, and The New York State College of Ceramics at Alfred University. Because of the existence of these schools there are more buildings of larger stature than might normally be found in a small rural village. Downtown Alfred is quite historic with many fine examples of architecture. One of the traits of many houses is the terra cotta tile roofs made using local clays.

There is a small stream known as Canacadea Creek, that flows throughout the year from south to north. This stream flows to the Canisteo River which is a tributary to the Susquehanna River watershed. The topography is steep hill country as it is part of the Allegheny Plateau, being the northern part of the Appalachian Mountain chain.

There were 996 households out of which 21.0% had children under the age of 18 living with them, 40.3% were married couples living together, 4.3% had a female householder with no husband present, and 53.0% were non-families. 33.0% of all households were made up of individuals and 9.3% had someone living alone who was 65 years of age or older. The average household size was 2.28 and the average family size was 2.99.

Communities and locations in the Town of Alfred

This climatic region is typified by large seasonal temperature differences, with warm to hot (and often humid) summers and cold (sometimes severely cold) winters. According to the Köppen Climate Classification system, Alfred has a humid continental climate, abbreviated "Dfb" on climate maps.

All content from Kiddle encyclopedia articles (including the article images and facts) can be freely used under Attribution-ShareAlike license, unless stated otherwise. Cite this article:
Alfred, New York Facts for Kids. Kiddle Encyclopedia.