Alfred Spiro Moisiu (Albanian: [alˈfɾɛd spi'ɾɔ ˈmɔisiu]; born 1 December 1929) is a former Albanian military general, diplomat and politician. He was the President of Albania from 2002 to 2007. He is the oldest son of Albanian Army general, Spiro Moisiu.

Moisiu was born into the family of General Spiro Moisiu. In 1946 he was sent to the Soviet Union as a student. In 1948 he graduated from the military engineering school in Saint Petersburg (then Leningrad). He served in Tirana as a platoon-commander at the United Officers' School (1948–1949) and as a teacher at the Skanderbeg Military Academy (1949–1951). From 1952 to 1958 he attended the Academy of Military Engineering in Moscow.

Back in Albania, Moisiu continued his military career in the engineers' department of the Ministry of Defense. From 1967 to 1968 he attended the higher courses of general staff at the Defense Academy of Tirana. At the same time he commanded a pontoon brigade in Kavajë (1966–1971). In 1971 he became the chief of the Bureau of Engineering and Fortifications of the Ministry of Defense (under Enver Hoxha, when thousands of concrete casements were built as defense against states held to be hostile). 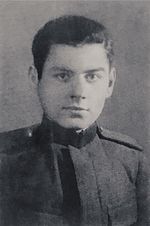 Alfred Moisiu as a military student in 1947

In 1979, Moisiu received a PhD in military science. From 1981 he was Deputy Minister of Defense. Under the ministers Beqir Balluku, Mehmet Shehu and Kadri Hasbiu he held this post until October 1982 (Shehu died violently in December 1981). He was appointed by Enver Hoxha to fill Albania with bunkers. Hoxha sent Moisiu to Burrel, where he served as the commander of an engineers' company from 1982 to 1984. Moisiu left active service as a general.

All content from Kiddle encyclopedia articles (including the article images and facts) can be freely used under Attribution-ShareAlike license, unless stated otherwise. Cite this article:
Alfred Moisiu Facts for Kids. Kiddle Encyclopedia.