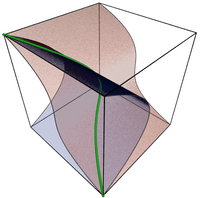 The twisted cubic is a projective algebraic variety.

In mathematics, algebraic varieties (also called varieties) are one of the central objects of study in algebraic geometry. The first definitons of algebraic variety defined it as the set of solutions of a system of polynomial equations, over the real or complex numbers. Modern definitions of an algebraic variety generalize this notion while they try to preserve the geometric intuition behind the original definition.

The notion of variety is similar to that of manifold. One difference between a variety and a manifold is that a variety may have singular points, while a manifold will not. Proven around the year 1800, the fundamental theorem of algebra establishes a link between algebra and geometry by showing that a monic polynomial in one variable with complex coefficients (an algebraic object) is determined by the set of its roots (a geometric object). Generalizing this result, Hilbert's Nullstellensatz provides a fundamental correspondence between ideals of polynomial rings and algebraic sets. Using the Nullstellensatz and related results, mathematicians have established a strong correspondence between questions on algebraic sets and questions of ring theory. This correspondence is the specifity of algebraic geometry among the other subareas of geometry.

All content from Kiddle encyclopedia articles (including the article images and facts) can be freely used under Attribution-ShareAlike license, unless stated otherwise. Cite this article:
Algebraic variety Facts for Kids. Kiddle Encyclopedia.