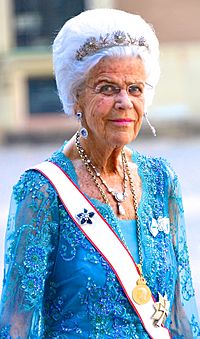 Countess Alice Victoria Trolle-Wachtmeister (née Tornérhielm; 9 May 1926 – 26 June 2017) was a Swedish noblewoman who served the Royal Court of Sweden from the 1970s to 2015, having served as Chief Court Mistress from 1994 to 2015. She was born in Annerstad, Kronoberg County.

Trolle-Wachtmeister died at Trolle-Ljungby Castle in Scania, Sweden on 26 June 2017 from complications of Alzheimer's disease, aged 91.

All content from Kiddle encyclopedia articles (including the article images and facts) can be freely used under Attribution-ShareAlike license, unless stated otherwise. Cite this article:
Alice Trolle-Wachtmeister Facts for Kids. Kiddle Encyclopedia.