Alisma plantago-aquatica, also known as European water-plantain, common water-plantain or mad-dog weed, is a perennial flowering aquatic plant widespread across most of Europe and Asia from Portugal and Morocco to Japan, Kamchatka and Vietnam. It is also regarded as native in northern and central Africa as far south as Tanzania. It is reportedly naturalized in southern Africa, Australia, New Zealand, Alaska, British Columbia, Washington state and Connecticut. Some sources maintain that the species is widespread across North America, but these reports appear to have been based on misidentified specimens. It is found on mud or in fresh waters. 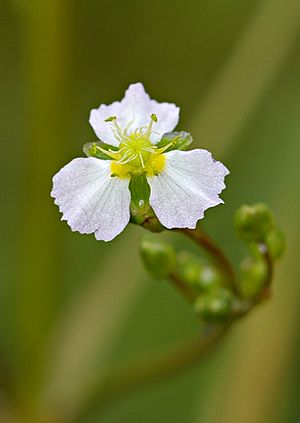 Alisma plantago-aquatica is a hairless plant that grows in shallow water, consists of a fibrous root, several basal long stemmed leaves 15–30 cm long, and a triangular stem up to 1 m tall. It has branched inflorescence bearing numerous small flowers, 1 cm across, with three round or slightly jagged, white or pale purple petals. The flowers open in the afternoon. There are 3 blunt green sepals, and 6 stamens per flower. The carpels often exist as a flat single whorl. It flowers from June until August.

The word alisma is said to be a word of Celtic origin meaning "water", a reference to the habitat in which it grows. Early botanists named it after the Plantago because of the similarity of their leaves.

Narrow leaved water plantain Alisma lanceolatum differs only in that the leaf tips are acuminate and shape is narrow lanceolate.

According to Flora of the U.S.S.R. (1934, translated 1968), “A powder prepared from dried roots is used in popular medicine as a cure for rabies and crushed leaves are used against mammary congestion; fresh leaves are employed in homeopathy. [...] Since this species is often confounded or identified with others of the genus, the reported data may also refer to [Alisma orientale or Alisma lanceolatum].” Indeed, Alisma plantago-aquatica is also known as mad-dog weed, as if it could be used to cure rabies. Do not confuse this with Scutellaria lateriflora (mad-dog skullcap), which is also sometimes called mad-dog weed.

Alisma orientale is sometimes treated as a variety of this species (Alisma plantago-aquatica var. orientale). The rhizomes of A. orientale have been used as a traditional Chinese medicine, ze xie. However, it may have serious side effects or even toxic effects such as hepatotoxicity in patients with chronic hepatitis B.

In vitro and animal studies indicate that extracts of Alisma plantago-aquatica or its isolated chemical constituents may have biological activities including:

Chemical constituents of Rhizoma Alismatis—rhizomes of Alisma orientale (syn. Alisma plantago-aquatica var. orientale) as a traditional Chinese medicine—include alisol A 24-acetate and alisol B 23-acetate. The content of these two compounds are significantly different in Rhizoma Alismatis of different areas.

All content from Kiddle encyclopedia articles (including the article images and facts) can be freely used under Attribution-ShareAlike license, unless stated otherwise. Cite this article:
Alisma plantago-aquatica Facts for Kids. Kiddle Encyclopedia.