All Monsters Attack facts for kids

All Monsters Attack, released in Japan as Gojira-Minira-Gabara: Ōru Kaijū Daishingeki (ゴジラ・ミニラ・ガバラ オール怪獣大進撃code: ja is deprecated , lit. Godzilla, Minilla, and Gabara: All Monsters Attack), is a 1969 Japanese kaiju film directed by Ishirō Honda, written by Shinichi Sekizawa, and produced by Tomoyuki Tanaka. The film, which was produced and distributed by Toho Studios, is the tenth film in the Godzilla series, and features the fictional monster characters Godzilla, Minilla, and Gabara. The film stars Tomonori Yazaki, Kenji Sahara, and Hideyo Amamoto, with special effects by Honda and Teruyoshi Nakano, and features Haruo Nakajima as Godzilla, Marchan the Dwarf as Minilla, and Yasuhiko Kakuyuki as Gabara.

All Monsters Attack was released theatrically in Japan on December 20, 1969. It received a theatrical release in the United States in 1971 by Maron Films, under the title Godzilla's Revenge, on a double bill with the 1967 film Night of the Big Heat. The film is often retrospectively considered as one of the worst Godzilla films, although Honda had come to consider it as one of his favorites in the series.

Ichiro Miki is a highly imaginative but lonely latchkey kid growing up in urban and polluted Kawasaki. Every day he comes home to his family's empty apartment. His only friends are a toymaker named Shinpei Inami and a young girl named Sachiko. Every day after school, Ichiro is tormented by a gang of bullies led by a child named Sanko Gabara. To escape his loneliness, Ichiro sleeps and dreams about visiting Monster Island. During his visit, he witnesses Godzilla battle three Kamacuras and Ebirah, a giant sea monster. Ichiro is then chased by a rogue Kamacuras and falls into a deep cave, but luckily avoids being caught by Kamacuras. Shortly afterwards, Ichiro is rescued from the cave by Minilla. Ichiro quickly learns that Minilla has bully problems too, as it is bullied by a monstrous ogre known as Gabara.

Ichiro is then awoken by Shinpei who informs him that his mother must work late again. Ichiro goes out to play, but is then frightened by the bullies and finds and explores an abandoned factory. After finding some souvenirs (tubes, a headset, and a wallet with someone's license), Ichiro leaves the factory after hearing some sirens close by. After Ichiro leaves, two bank robbers who were hiding out in the factory learn that Ichiro has found one of their driver's licenses and follow him in order to kidnap him.

Later, after his sukiyaki dinner with Shinpei, Ichiro dreams again and reunites with Minilla. Together they both watch as Godzilla fights Ebirah, Kumonga, and some invading jets. Then in the middle of Godzilla's fights, Gabara appears and Minilla is forced to battle it, and after a short and one-sided battle, Minilla runs away in fear. Godzilla returns to train Minilla how to fight and use its own atomic breath. However, Ichiro is woken up this time by the bank robbers and is taken hostage as a means of protection from the authorities.

Out of fear and being watched by the thieves, Ichiro calls for Minilla's help and falls asleep again where he witnesses Minilla being beaten up by Gabara again. Finally, Ichiro helps Minilla fight back at Gabara and eventually, Minilla wins, catapulting the bully through the air by a seesaw-like log. Godzilla, who was in the area watching comes to congratulate Minilla for its victory but is ambushed by a vengeful Gabara. Godzilla easily beats down Gabara and sends the bully into retreat, never to bother Minilla again. Now from his experiences in his dreams, Ichiro learns how to face his fears and fight back, gaining the courage to outwit the thieves just in time for the police, called by Shinpei, to arrive and arrest them. The next day, Ichiro stands up to Sanko and his gang and wins, regaining his pride and confidence in the process. He also gains their friendship when he plays a prank on a billboard painter. 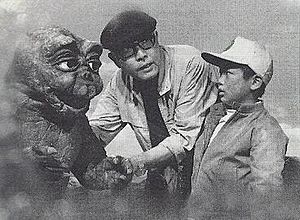 All content from Kiddle encyclopedia articles (including the article images and facts) can be freely used under Attribution-ShareAlike license, unless stated otherwise. Cite this article:
All Monsters Attack Facts for Kids. Kiddle Encyclopedia.