Kids Encyclopedia Facts
Not to be confused with All Saints' Church, North Street, York.

All Saints’ Church, Pavement, York is a Grade I listed parish church in the Church of England in York. Services are from the Book of Common Prayer. 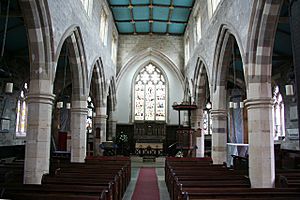 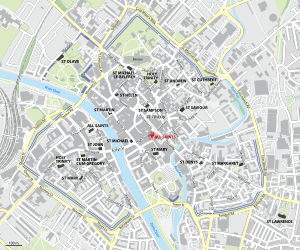 The church dates from the 14th century. The chancel was demolished in 1780 and the east end was rebuilt. The north wall and the west end were rebuilt in 1834.

The lantern was rebuilt in 1837. The vestry was added between 1850 and 1855. The church was restored in 1887 by George Edmund Street when the stonework was cleaned, the pinnacles restored, and the central east window fitted with stained glass by Charles Eamer Kempe.

All content from Kiddle encyclopedia articles (including the article images and facts) can be freely used under Attribution-ShareAlike license, unless stated otherwise. Cite this article:
All Saints' Church, Pavement, York Facts for Kids. Kiddle Encyclopedia.