Kids Encyclopedia Facts
Not to be confused with All Saints' Church, Pavement, York.

All Saints' Church is a Church of England parish church on North Street, York, North Yorkshire. The church is a Grade I listed building. 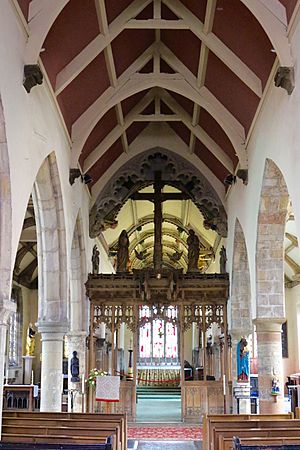 The earliest part of the church is the nave dating from the 12th century. The arcades date from the 13th century and the east end was rebuilt in the 14th century, when the chancel chapels were added.

An anchorite building was erected at the west end in the fifteenth century and a squint made through the wall so that Emma Raughton could observe and hear the Mass being said. This was rebuilt in 1910.

The church was restored between 1866 and 1867 by JB and W Atkinson of York, which included the rebuilding of the south aisle wall, the addition of a porch and a vestry, half of the roof being replaced, new seating provided throughout, the pillars and walls scraped, and a new organ provided The masonry work was done by Mr Brumby of Skeldergate, the carpentry by Mr Dennison, the plumbing and glazing by Messrs Hodgson and the painting by Mr Lee of Gillygate. The chancel ceiling and reredos were decorated by Mr Knowles. The chancel was laid with Minton tiles. The total cost of the restoration, including the new organ, was £1,500 (equivalent to £93,626 in 2021).

The chancel screen was installed in 1906, and designed by Edwin Ridsdale Tate. He also rebuilt the anchorite's house in 1910. The church was restored again in 1991 by the architect Peter Marshall.

The church is noted as containing the finest collection of medieval glass in York except that of York Minster, mostly dating from the early 14th century. Perhaps the most famous is that depicting scenes from the Prick of Conscience dating from c. 1410.

Alongside the Prick of Conscience, another famous window is The Corporal Acts of Mercy. The window shows six of the seven corporal acts, it is not known why the seventh (burying the dead) is not shown. The window depicts the Blackburn family, who at the time were influential traders, specifically Nicholas Blackburn who at the time was mayor of york and is said to be the one who paid for the window.

From the north aisle, the windows are 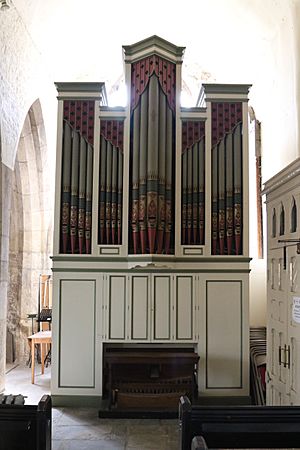 The organ by Forster and Andrews

The pipe organ was built by Forster and Andrews and dates from 1867. A specification of the organ can be found on the National Pipe Organ Register.

All content from Kiddle encyclopedia articles (including the article images and facts) can be freely used under Attribution-ShareAlike license, unless stated otherwise. Cite this article:
All Saints' Church, North Street, York Facts for Kids. Kiddle Encyclopedia.