All Saints Church was built around 1250 at Leigh, north Wiltshire, England, and was originally on a site half a mile to the north of its current location. In 1896, the nave, porch and bell tower were moved from their original location and a new church was built. The chancel and the east gable of the old nave remain in the old churchyard as All Saints Chancel.

By the early 1890s, the church had fallen into significant disrepair and the path leading to it was so wet that during winter it was practically inaccessible. The architect C.E. Ponting urged that the church should be restored and the approach improved. However, the Archdeacon of Bristol, Hemming Robeson, reported that it was "quite impossible to repair the church on its present site and at the same time secure its practical utility. I myself suggested...to rebuild the nave as far as possible, stone for stone, in a more convenient position."

This bold course was adopted. Mr. Charles T. Stevens offered to give a site and authorisation was obtained to take down and re-erect the nave, porch and tower at a cost not to exceed 1300 pounds. This was accomplished by carefully marking each stone and each piece of timber to correspond with drawings which had been made to ensure their correct positions and transporting them by hand to be rebuilt at the current site.

The porch was built in the late fourteenth century and the original roof, the door with its handmade nails and a niche with a pedestal for a figure can all still be seen. Also, probably a stoup for holy water.

The walls of the nave are thirteenth century but the massive wooden beams of the roof were unique to a Parish Church with a gothic character. The principle trusses of the roof are of collar form with the moulded braces pierced with openings of quatrefoil shape.

Everywhere on the beams and bosses in the main part of the nave are carved heads and figures of Jacobean detail.

At the East end of the nave, the roof has an oak boarded and panelled ceiling which probably dates back to the fifteenth century and was re-fixed in 1638 when the whole roof was re-built. The bosses are extremely rich and delicate in detail.

Standing beneath this ceiling and looking west down the Nave, the text that can be seen on the lower part of the bell tower reads:

Colossians Chap III, Vers 16;
Let the word of Christ dwell in you richly in all wisdom; teaching and admonishing one another in psalms and hymns, singing with grace in your hearts to the Lord.

Moving the church to a more accessible site is commemorated by inscriptions carved on the south wood moulding:

On one of the south purlins:

On the collar of the east truss is carved the commemoration:

The present roof was built in 1638 and this is recorded by a carving in the North side wood moulding:

(with a fleur de lys between each initial) continuing:

There is an eighteenth-century pulpit and sounding board. The windows are fourteenth and fifteenth century and in one window in the north side of the nave a fragment of the original glass can be seen.

Some of the pews near the pulpit are thought to be seventeenth century. Near the door is the font, with its history recorded on a brass plate at the base of the stem. The Rev. M.J. Milling discovered the font being used as a cheese press at an inn in Ashton Keynes and was told that it had previously been used as a cattle trough. Presumably it had been removed from the church and deliberately desecrated at the time of the Parliamentary Commonwealth when infant baptism was forbidden. In 1897, the stem was discovered forming the base of the north-east post of the tower and the whole font was restored to its proper use. The font ewer was given in memory of D.A. Bird, G. Price, V. Ody, and R. Godwin, who gave their lives in World War II 1939-1945.

The chalice is dated 1596, in the reign of Elizabeth I, and the George I silver paten by Thomas Teasle was made in 1723. There was also a pewter flagon and plate for bringing the wine and bread to the altar. The flagon is inscribed "Richard Selby and John Tucker / Chapel Wardens 1776".

There are three bells. The largest is inscribed "Henry Neale Made Mee: 1627 GH:ESQVYER:EH:".

The middle bell is inscribed "Ave Maria: Gracia Plena" and although no date is inscribed it is thought to have been made in Bristol about 1450. 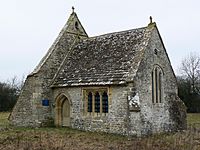 All Saints Chancel, Waterhay, now under the care of the Churches Conservation Trust.

All Saints Chancel (the original church) is recorded in the National Heritage List for England as a designated Grade II* listed building, and is a redundant church in the care of the Churches Conservation Trust. It was declared redundant on 1 February 1977, and was vested in the Trust on 24 October 1978.

The chancel is entered through a finely moulded thirteenth century doorway which has a hood-mould resting on a human head and a beast's head. Inside, on the South wall there is a late thirteenth century window having three stepped lancet lights under one arch. On the wall of the chancel are 17th-century texts painted on the walls and framed in designs of clouds and scrolls. The inside sill is carried down a sedilia and in the east jamb there is a piscina for washing communion vessels.

In 1983 the texts were re-lettered in their original style and we can see the similarity to the decoration of the Colossians text in the Church.

I am the Almighty God. Walk before me and be thou perfect.

All content from Kiddle encyclopedia articles (including the article images and facts) can be freely used under Attribution-ShareAlike license, unless stated otherwise. Cite this article:
All Saints Church, Leigh Facts for Kids. Kiddle Encyclopedia.