Allauddin Khan, also known as Baba Allauddin Khan (8 October 1862 – 6 September 1972) was an Indian sarod player and multi-instrumentalist, composer and one of the most notable music teachers of the 20th century in Indian classical music.

Khan was born in Shibpur village in Brahmanbaria (in present-day Bangladesh). His father, Sabdar Hossain Khan, was a musician. Khan took his first music lessons from his elder brother, Fakir Aftabuddin Khan. At age ten, Khan ran away from home to join a jatra party where he was exposed to a variety of folk genres: jari, sari, baul, bhatiyali, kirtan, and panchali.

Khan went to Kolkata, where he met a physician named Kedarnath, who helped him to become a disciple of Gopal Krishna Bhattacharya (also known as Nulo Gopal), a notable musician of Kolkata in 1877. Khan practiced sargam for twelve years under his guidance. After the death of Nulo Gopal, Khan turned to instrumental music. He learned to play many indigenous and foreign musical instruments like sitar, flute, piccolo, mandolin, banjo, etc., from Amritalal Dutt, a cousin of Swami Vivekananda and the music director of the Star Theatre. He learnt to play sanai, naquara, tiquara and jagajhampa from Hazari Ustad and pakhawaj, mridang and tabla from Nandababu. 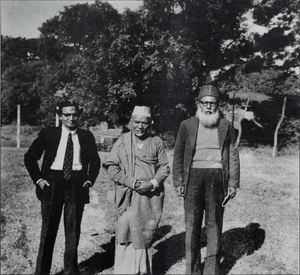 Khan became court musician for the Maharaja of Maihar. Here he laid the foundation of a modern Maihar gharana by developing a number of ragas, combining the bass sitar and bass sarod with more traditional instruments and setting up an orchestra. In 1935, he toured Europe, along with Uday Shankar's ballet troupe, and later also worked at his institute, Uday Shankar India Culture Centre at Almora for a while. In 1955, Khan established a college of music in Maihar. Some of his recordings are made at the All India Radio in 1959–60. 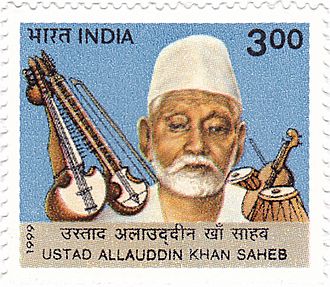 Khan's house was in Maihar. This house has been restored by Ambica Beri as part of a development that includes an artists and a writers retreat nearby.

Anecdotes about Khan range from throwing a tabla tuning hammer at the Maharaja himself to taking care of disabled beggars. Nikhil Banerjee said that the tough image was "deliberately projected in order not to allow any liberty to the disciple. He was always worried that soft treatment on his part would only spoil them".

All content from Kiddle encyclopedia articles (including the article images and facts) can be freely used under Attribution-ShareAlike license, unless stated otherwise. Cite this article:
Allauddin Khan Facts for Kids. Kiddle Encyclopedia.