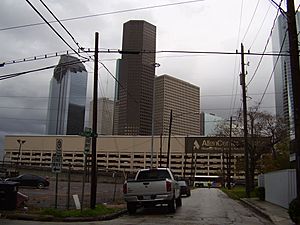 TrizecHahn Properties acquired the Allen Center in 1996. Trizec defeated 16 other real estate companies so it could purchase the center for an amount reported by Tanya Rutledge of the Houston Business Journal as $270 million.

When Trizec acquired the Allen Center in November 1996, the complex had a 76 percent occupancy rate. By 1997, Trizec had convinced several tenants of the Cullen Center, also owned by Trizec, to relocate to the Allen Center. Paul Layne, a vice president of the office division of Trizec, said that the shifting of tenants would lead to Allen Center having an occupancy rate of 92 percent in 1998.

One Allen Center is a 452 ft (138m) tall skyscraper. It was completed in 1972 and has 34 floors. It is the 31st tallest building in the city. One Allen Center employs a composite stub-girder steel frame floor system, originally developed in part by Joseph Colaco then of Ellisor Engineers Inc., currently of CBM Engineers, Inc..

Macquarie Bank houses its Houston representative office in Suite 3100 of the building.

Two Allen Center was previously known as the Citicorp Building.

At one point the Consulate-General of Switzerland in Houston resided in Suite 1040 of Two Allen Center; the mission closed in 2006.

All content from Kiddle encyclopedia articles (including the article images and facts) can be freely used under Attribution-ShareAlike license, unless stated otherwise. Cite this article:
Allen Center Facts for Kids. Kiddle Encyclopedia.