Kids Encyclopedia Facts
This page is about the skyscraper in Houston. For the building in Australia, see Heritage Plaza (Australia).

Heritage Plaza is a postmodern skyscraper located in the Skyline District of downtown Houston, Texas. Standing at 762 feet (232 m), the tower is the 5th tallest building in Houston, the 8th tallest in Texas, and the 60th tallest in the United States. The building, designed by Houston-based M. Nasr & Partners P.C., was completed in 1987, and has 53 floors.

Heritage Plaza completed construction in early 1987. It was the last major office building completed in downtown Houston in the midst of the collapse of the Texas real estate, banking, and oil industries in the 1980s. The building stood as the most recently completed major skyscraper in Houston for nearly 15 years, until the completion of 1500 Louisiana Street in 2002.

In early 2007, Deloitte & Touche USA L.L.P. executed a lease to occupy 300,000 square feet (28,000 m2) as part of a 12-year, 10-floor lease with options to increase that space, if needed. The new lease consolidated staff from three Houston sites to one downtown location, making Deloitte the largest tenant in Heritage Plaza. 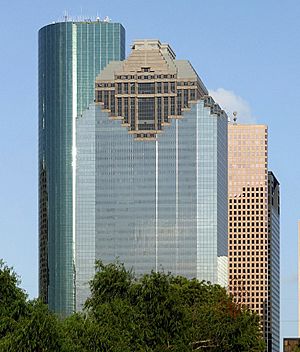 Heritage Plaza is well known because of its central location in the central business district skyline, and for the stepped granite feature located on the top of the building that resembles a Mayan pyramid. This feature was inspired by the architect's visit to the Mexican Yucatán Peninsula. The crown of the building is also said to resemble an image of a bald eagle spreading its wings.

The interior lobby of Heritage Plaza was also designed with Mexican influences. The lower levels of the building, which contain a large food court, contain a distinctive multi-level marble waterfall that falls from the lobby.

Heritage Plaza is one of the few skyscrapers in downtown Houston that is not directly connected to the extensive Houston tunnel network. It is, however, connected to the DoubleTree Hotel Houston-Allen Center through a skyway.

All content from Kiddle encyclopedia articles (including the article images and facts) can be freely used under Attribution-ShareAlike license, unless stated otherwise. Cite this article:
Heritage Plaza Facts for Kids. Kiddle Encyclopedia.