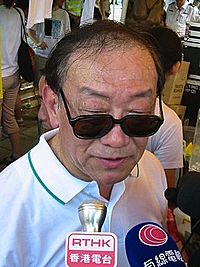 He was also the unofficial member of the Executive Council of Hong Kong from 1986 to 1992. He was the founding chairman of the Liberal Party. He retired after he lost the 1998 election.

After his retirement, he became a political commentator and hosted Legco Review, a RTHK weekly TV programme on the news about Legislative Council, among several other posts.

All content from Kiddle encyclopedia articles (including the article images and facts) can be freely used under Attribution-ShareAlike license, unless stated otherwise. Cite this article:
Allen Lee Facts for Kids. Kiddle Encyclopedia.