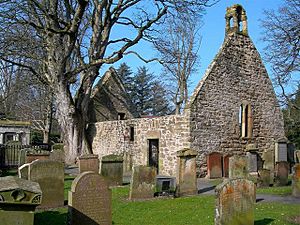 The Alloway Auld Kirk, which dates back to the 16th Century, is a ruin in Alloway, South Ayrshire, Scotland , celebrated as the scene of the witches' dance in the poem "Tam o' Shanter" by Robert Burns. 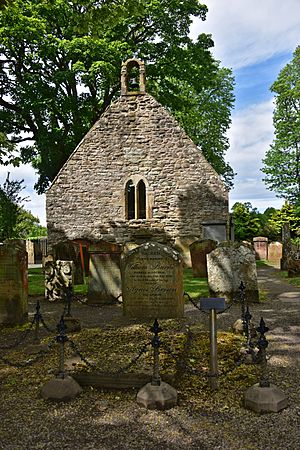 William Burnes, father of the poet, is buried in the graveyard together with his wife Agnes and daughter Isabella as well as two of his nieces. Alloway was where he and his wife had first raised their family before moving to Mount Oliphant and Lochlea, and William had attempted to maintain the grounds of the Kirk, which was already a ruin at the time. The original memorial stone has eroded and the present day stone differs in wording, memorializing both of Burns's parents, and includes an epitaph the poet wrote for his father. Burns's sister, Isabella Burns Begg, is also buried in the Kirkyard, along with other notable figures such as David Cathcart, Lord Alloway.

Robert Burns presented his friend John Richmond with a silver mounted snuffbox made with wood taken from the rafters of the Auld Alloway Kirk.

A David Auld removed the remaining rafters and used them to make chairs and other souvenirs, making a considerable profit from the sales.

Following restoration work, the Kirk and graveyard were reopened to the public by Scottish First Minister Alex Salmond in April 2008. The church itself is a scheduled monument and the churchyard a Category B listed building.

All content from Kiddle encyclopedia articles (including the article images and facts) can be freely used under Attribution-ShareAlike license, unless stated otherwise. Cite this article:
Alloway Auld Kirk Facts for Kids. Kiddle Encyclopedia.