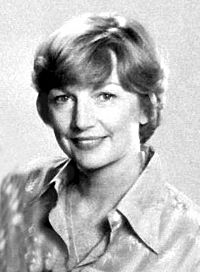 McLerie was known for her roles in They Shoot Horses, Don't They?, The Way We Were, and in All the President's Men. She played the recurring role of Arthur Carlson's wife Carmen on WKRP in Cincinnati (1978–82).

McLerie died at her home in North Bend, Washington of Alzheimer's disease on May 21, 2018 at the age of 91.

All content from Kiddle encyclopedia articles (including the article images and facts) can be freely used under Attribution-ShareAlike license, unless stated otherwise. Cite this article:
Allyn Ann McLerie Facts for Kids. Kiddle Encyclopedia.