Bay Ridge is a neighborhood in the southwest corner of the New York City borough of Brooklyn. It is bounded by Sunset Park on the north, Dyker Heights on the east, the Narrows and the Belt Parkway on the west, Fort Hamilton Army Base in the southeast corner, and the Verrazano Bridge on the south. 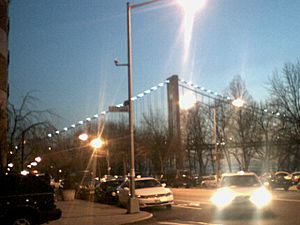 Night view of the Verrazano-Narrows Bridge across from Shore Road 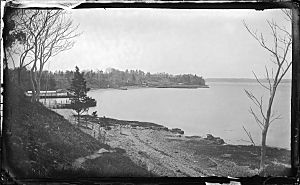 The first Dutch settlers began farming here in the 17th century. Well into the 19th century, what’s now considered Bay Ridge consisted of two sister villages: Yellow Hook to the north, named for the color of the soil, and Fort Hamilton to the south, named for the military installation at its center. The latter began to develop in the 1830s as a resort destination to lodge visitors to the army base. The former began to develop after 1850, when a group of artists moved to the area and founded a colony called Ovington Village; before that, it was mostly farmland.

In the 1850s, Historic Marker name to avoid association with yellow fever. "Bay Ridge" was suggested by local horticulturist James Weir after the area’s most prominent geographic features: the high ridge that offered views of New York Bay. The natural beauty attracted the wealthy, who built country homes along Shore Road, overlooking the water. By World War II, almost all of these large houses had been replaced with apartment buildings.

In the nineteenth and early twentieth centuries, many Norwegian and Danish sailors emigrated to Brooklyn, including Bay Ridge and neighboring Sunset Park; Lapskaus Boulevard, referring to the salted Norwegian beef stew, was the nickname of Eighth Avenue in this area. Development took off after the Fourth Avenue subway (today's R train) arrived in 1916, and accelerated through the 1920s, when the number of apartment buildings increased fivefold, replacing old farms, homesteads and houses.

Construction of the Verrazano-Narrows Bridge, which connects Bay Ridge to Staten Island, was completed in 1964. Though now an iconic structure, it was opposed by residents because it would require the demolition of many homes and businesses. Eight hundred buildings were destroyed, displacing 7,000 people, to make room for the bridge and its approach. Also destroyed was Fort Lafayette, part of New York City's defense system along with Fort Hamilton and Fort Wadsworth in Staten Island, replaced by the base of the bridge's east tower.

The Senator Street Historic District was listed on the National Register of Historic Places in 2002. The Houses at 216-264 Ovington Ave. was listed in 2007. 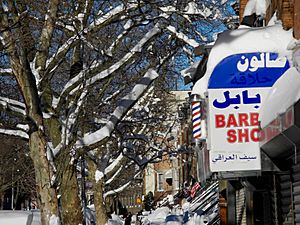 Bay Ridge's Arab community is a strong and vibrant one, and its presence is evident in everything from coffee shops to Babel Barber Shop, pictured above in the wake of the January 2016 snow storm.

The 2007 Brooklyn tornado hit this area, specifically 68th Street and Bay Ridge Avenue between Third and Fourth Avenues. Eleven houses had to be vacated after they suffered significant damage, and many of the trees on the two blocks toppled, landing on cars and stoops. The 4th Avenue Presbyterian Church had its very large stained glass window blown out. As the tornado lifted, it peeled the roof of a nearby Nissan dealership and deforested 40% of Leif Ericson Park. The tornado has been rated an EF-2 on the Enhanced Fujita scale, with winds between 111 and 135 MPH.

Bay Ridge is a largely middle-class neighborhood. With its strong family presence, it is not uncommon to see third or fourth generation families living in the region. Until the early 1990s Bay Ridge was a primarily Irish, Italian, and Norwegian neighborhood.

This area used to be highly Norwegian. Its Nordic heritage is still apparent in the neighborhood. For instance, there is an annual Norwegian Constitution Day Parade, also known as the Syttende Mai Parade, featuring hundreds of people in folk dress who parade down Third Avenue. It ends in Leif Ericson Park, named for the Viking explorer, where "Miss Norway" is crowned near the statue of Leif Ericson. The statue was donated by Crown Prince Olav, Prince of Norway, on behalf of the nation of Norway in 1939. There is also a Norwegian gifts-and-groceries store.

As of 1971, the 30,000-strong Norwegian community of Bay Ridge boasted that it was the fourth-largest Norwegian city in the world. Residents also compared Eighth Avenue's string of Norwegian businesses to Oslo's Karl Johans gate. 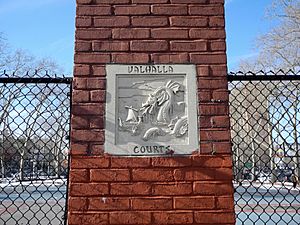 Bay Ridge's Norwegian heritage lives on today in the Valhalla Courts. While the Norse god Odin ruled the mythic hall from which the courts take their name, it is mostly local teenagers who rule these basketball playing areas.

Today, Bay Ridge's population is around 80,000 and maintains a sizable Irish, Italian, and Greek population. However, like other areas in South/Southwest Brooklyn, late in the 20th century it saw an influx of Russian, Polish, and Lebanese, and lesser numbers of Chinese. In recent decades many Middle Eastern and Arab Americans have moved to Bay Ridge. It has even been referred to as "the heart of Brooklyn's Arab community." Bay Ridge has many international restaurants and bars, especially along 3rd and 5th Avenue, its main commercial strips.

Bay Ridge has a high elderly population. It has been called a naturally occurring retirement community (NORC) because many of its families have grown up in the neighborhood while their children moved away. In 2006, it was reported that 20% of the population of Bay Ridge is 60 years of age or over.

Development has been a passionate issue for Bay Ridge residents, as in recent years they saw many of the decades-old two-family houses being demolished, replaced by condominiums known colloquially as "Fedder Homes," after the branded air conditioners poking out from the buildings' facades. The six-story apartment complexes lining Shore Road are among the tallest buildings in the neighborhood. In 2005, local community leaders and community activists from across the political spectrum united to issue rezoning laws.

Bay Ridge was chosen as an "Editor's Pick" in This Old House magazine April 2011 as a good neighborhood to buy an old house.

Landmarks and points of interest 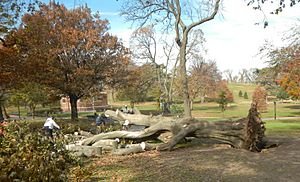 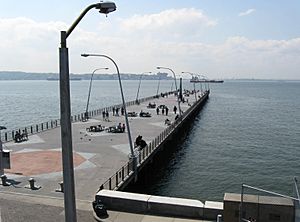 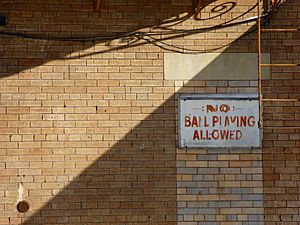 Historically speaking Bay Ridge has long been opposed to ball playing, and traces of this staunch position remain to this day on side streets stretching off of Fifth Avenue. 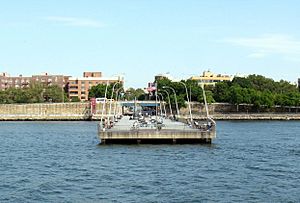 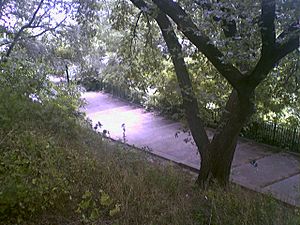 The park strip between the shore road and Narrows

Historic Fort Hamilton Army Base is located in the southwestern corner of the New York City borough of Brooklyn, with gates in Bay Ridge and Dyker Heights, and is one of several posts that are part of the region which is headquartered by the Military District of Washington. Its mission is to provide the New York metropolitan area with military installation support for the Army National Guard and the United States Army Reserve. The base is considered to be part of Bay Ridge. The children stationed at the base are zoned into Bay Ridge schools.

The area is served by the R train on the BMT Fourth Avenue Line of the New York City Subway between Bay Ridge Avenue and 95th Street.

Additionally, there are MTA express bus routes X27, X37 which mainly serve for the commute to Manhattan, but also run during off-peak hours on weekdays. The X27 also runs on weekends. The routes X28, X38 also serve the eastern part of Bay Ridge. Many Bay Ridge commuters opt for the relative comfort and convenience of the express bus. Bay Ridge is readily accessible by car, encircled by the Belt Parkway and Gowanus Expressway. Local bus routes include B1, B4, B8, B9, B16, B37, B63, B64, B70, S53, S79 SBS, S93.

Bay Ridge is expected to be served by the Citywide Ferry Service starting in 2017.

All content from Kiddle encyclopedia articles (including the article images and facts) can be freely used under Attribution-ShareAlike license, unless stated otherwise. Cite this article:
Bay Ridge, Brooklyn Facts for Kids. Kiddle Encyclopedia.