Kevin Joseph Aloysius “Chuck” Connors (April 10, 1921 – November 10, 1992) was an American actor, writer and professional basketball and baseball player. He is one of only 12 athletes in the history of American professional sports to have played both Major League Baseball and in the National Basketball Association. With a 40-year film and television career, he is best known for his five-year role as Lucas McCain in the highly rated ABC series The Rifleman (1958–63).

In his early years he was a basketball and baseball player, playing for teams such as the Boston Celtics. Then he was a baseball player, where he started playing in the minor leagues. In 1949, he debuted at the Los Angeles Dodgers, playing only one match for them. On the Chicago Cubs, he playing 66 games at first base.

Connors was a devoted, avid fan of the Brooklyn Dodgers despite their losing record during the 1930s, and he hoped to join the team one day. A gifted athlete, he earned a scholarship to the Adelphi Academy, a preparatory school in Brooklyn, where he graduated in 1939. He received additional offers for athletic scholarships from more than two dozen colleges and universities. 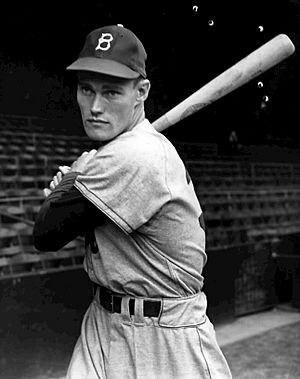 From those offers he chose to attend Seton Hall University in South Orange, New Jersey. There he played both basketball and baseball for the school, and it was there too where he changed his name. Since childhood Connors had disliked his first name Kevin, and he had sought another one. He tried using "Lefty" and "Stretch" before finally settling on "Chuck". The name derived from his time as a player on Seton Hall's baseball team. He would repeatedly yell to the pitcher from his position on first base, "Chuck it to me, baby, chuck it to me!" The rest of his teammates and spectators at the university's games soon caught on, and the nickname stuck.

Connors, though, left Seton Hall after two years to accept a contract to play professional baseball with the New York Yankees. That opportunity lasted only one season, for he joined the United States Army following America's entrance into World War II. During most of the war, he served as a tank-warfare instructor at Fort Campbell, located on the Kentucky-Tennessee border, and later at West Point in New York.

Chuck Connors did both low-budget movies and big Hollywood productions. These included South Sea Woman (1953), with Burt Lancaster, and directed by Arthur Lubin, and William Wyler's western, The Big Country (1958), with Gregory Peck.

Among his best performances is the Indian warrior Geronimo, in Geronimo (1962). Other classic movies he was in are Flipper (1963), Captain Nemo and the Underwater City (1969), Soylent Green (1973), with Charlton Heston, and directed by Richard Fleischer. 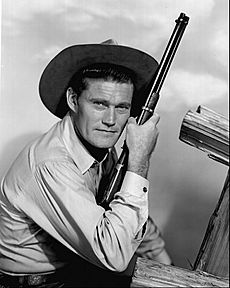 Publicity still of Connors for The Rifleman, 1962 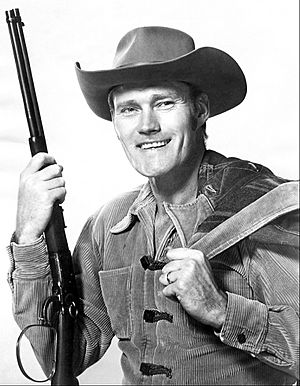 There were three rifles made for the show. Two identical 44–40 Winchester model 1892 rifles, one that was used on the show and one for backup, and a Spanish version called an El Tigre used in the saddle holster. The rifle levers were modified from the round type to a more "D" shaped in later episodes.

The popularity of the show led to tie-in products, such as toy models of the Rifleman's rifle, with the twirl-around-the-trigger lever-action that made the customized rifle a match for any six-shooter hand-gun used by villains. Also a Milton Bradley board game, called The Rifleman Game.

Another of his successes was the western TV series Branded (1965-1966). He played Jason McCord, an army official being falsely accused of cowardice.

In 1991, Connors was inducted into the Western Performers Hall of Fame at the National Cowboy & Western Heritage Museum in Oklahoma City. 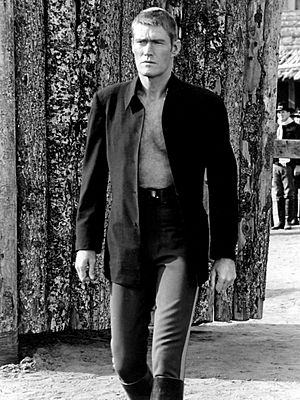 Connors had started smoking in 1940. For many years, he smoked three packs of Camel cigarettes a day until he quit the habit in the mid-1970s, though he occasionally resumed smoking afterwards. He died on November 10, 1992 at Cedars-Sinai Medical Center in Los Angeles at the age of 71 of pneumonia stemming from lung cancer. He was interred in the San Fernando Mission Cemetery in Los Angeles.

All content from Kiddle encyclopedia articles (including the article images and facts) can be freely used under Attribution-ShareAlike license, unless stated otherwise. Cite this article:
Chuck Connors Facts for Kids. Kiddle Encyclopedia.