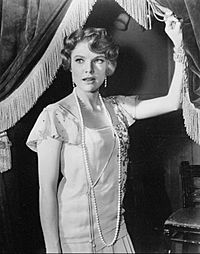 Scott was born in Los Angeles, California. She is the daughter of actress Laura Straub and screenwriter Allan Scott. She was married to producer Lee Rich from 1964 until their divorce in 1983. The couple had two children.

All content from Kiddle encyclopedia articles (including the article images and facts) can be freely used under Attribution-ShareAlike license, unless stated otherwise. Cite this article:
Pippa Scott Facts for Kids. Kiddle Encyclopedia.